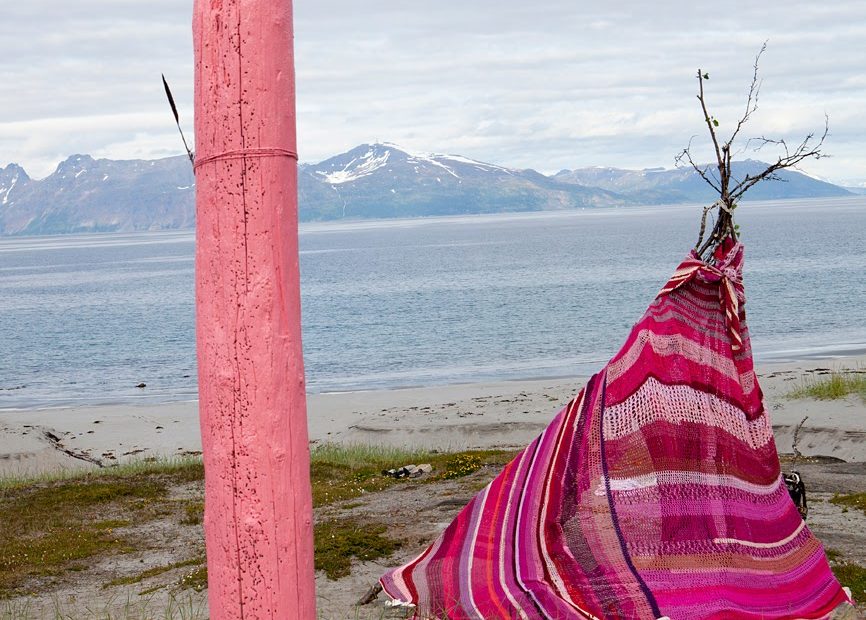 Departure Friday 18.00 from the festival site.

The Karlsøy Festival has for several years had a natural art program (land art), Støy! initiated, organized and curated by Anita Hillestad. Inspired by the wonderful foundations laid by Hillestad, the festival itself takes over the baton with Gabriel Kvendseth as this year's curator.

An open invitation went out this spring, which received an overwhelming number of interested parties. Of these, we will see contributions from the following artists on the nature art walk. In addition, you should not ignore the fact that there will also be an opportunity to see spontaneous do-it-yourself works as part of the walk.

Ponti and Pagoda is an artist duo connected to the haven of Christiania in Denmark.

In many ways, you can say that Christiania and Karlsøya have a parallel history that both spring from the same zeitgeist in the late 60s and early 70s.

Their participation in the Karlsøy Festival has been initiated by Pagode, who has an architectural background. throughout his artistic work, he has worked in fields of tension between different materials, crafts, zealots, art and poetry.

Pagode has often been a catalyst for finding the flame in passionate souls, which has, among other things, resulted in the development of four housing communities outside Copenhagen, as well as several projects in Christiania.

MayaMi Samuelsen. Wind-Wind Situation is a project about the power of the wind and the eagle and how windmills destroy/affect nature and kill birds - with a special focus on the eagles.

The title is inspired by the expression win-win situation, because I love puns and because I really don't think that the wind turbines in Norway constitute a win-win situation for either people or nature, the establishment of wind power plants requires huge natural areas, kills countless birds and insects and much of the energy is exported out of the country. If you search for Wind-Wind Situation on Google, you will find articles related to wind turbines. Wind power plants and wind farms are, to put it mildly, in the wind in Norway at the moment and I want to make a show out of this.

Line Sanne (b.1980) living in Tjøme, is trained Spatial designer/scenographer at Central Saint Martins college of Arts and Design, London and has a Master's degree in Nonfiction. Her artistic works are often based on site-specific phenomena, as she is concerned with investigating how the spaces, places and materials affect her aesthetic actions, both physically and psychologically.

Sanne works with relational projects where other people's actions form a significant part of the artistic expression. In recent years, she has allowed herself to be fascinated by Kjetil Røed's examination of the eleven virtues and Friedrich Schiller's theory of play. Themes in her works mainly revolve around attention, cooperation and solidarity, and with an experimental approach to natural materials and phenomena, Sanne tries to expand her understanding of nature, culture and the surroundings in which she finds herself.

An ecofemist journey of education, a new national eroticism, a study trip in brown stew, a wedding journey. Tandi Reason Dahl and Stix Omar deal with Norway up and down and what is gathered will be performed at the Karlsøy Festival.

Tribute to Eidis Hansen - gravel patriarchy, 371 kilos of stone as a platform for a world premiere. Morgenstund has gold in his mouth, a verbal and visual manifesto, performed by Brun – a future experimental folk music ensemble that asks; what is positive nation building and who gets to be part of the definition of this? What does cultural heritage mean if it cannot accommodate a diversity that reflects societal development?

We are nothing but dust!