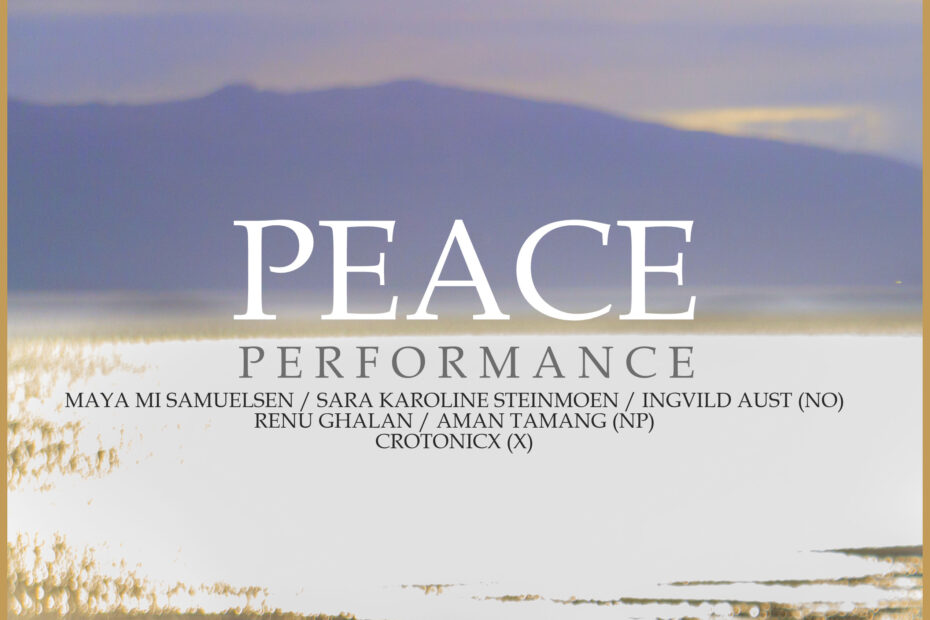 Karlsøy Yurta is a construction project to be realized in 2023. The vision is a new and dynamic arena that will strengthen and further develop the island's infrastructure. The artistic goal is to stimulate more local activities that invite and facilitate interdisciplinary projects, collective co-productions and dissemination of new performing arts in northern Norway.

This year, the Karlsøy Festival will mark the area where the yurta will be built with a specially made "PEACE PERFORMANCE" program consisting of local, regional, national, international and interdimensional artists who all have in common that they bring counterforce, boundless art and universal peace to Karlsøy in Troms.

A performance about rebellion and peace, about finding peace through rebellion. A peaceful rebellion, a rebellious search for peace.

This performance is motivated by the fight for the untouched nature and the fight against humans' many destructive interventions in it in the world in general, but in Karlsøy municipality in particular.

Maya Mi Samuelsen has long worked in this landscape and in this performance she will focus on finding peace through rebellion. She is inspired by the theme of this year's festival in the face of her rebellion against human destructive interventions with a special focus on the fish farm located just outside her house on Karlsøya and Fakken Wind Power Park located on Vannøya (neighboring island).

Maya Mi was born and raised on Karlsøy in Troms, here she has danced in the "spring stone" longer than she remembers. Samuelsen attended the School of Contemporary Dance in Oslo, and graduated in the autumn of 2012. Now she works as a dance artist and dance teacher with main base on Karlsøy and in Tromsø. For Maya Mi, it is very important to fight to be able to make a living from dance art where you come from, and she is concerned with spreading dance art in areas where it almost does not exist. In 2017, she was awarded the Karlsøy Municipality and Sparebank1 Nord Norge's culture prize for her efforts in dance art. In November 2017, she joined the talent program UREDD.

She works from her own life experiences and is known for promoting political themes that engage her through her art.

Sara Karoline Steinmoen is interested in how art can change the way we see the world. She received Fritt Ord's student scholarship for her dissertation "Breaking The Occupation Of The Mind - The Freedom Theater and Palestine Youth Empowerment" at UiT in 2015. She was also part of the jury for the peace film award at TIFF in Tromsø. While living in Tromsø, she worked with the theater terminal, led by Mari Andreassen.

Sara later moved to Paris in 2017 to study acting and LEM - movement and scenography at the Jacques Lecoq Theater School. In Paris, she has, among other things, been assistant director for the Good Chance Theater (for and by refugees in Paris) which performed at the Center Pompidou in the exhibition "From Home To Here" by Boltanski. Sara currently works in both Norway and France.

In this work, Ingvild Aust seeks to talk about what peace is and can be through poetry and music. She brings with her slum poetic texts that explore the concept of peace and what we can do to create a more peaceful world.

Ingvild Aust is the slut and rapper from Bodø, living in Tromsø. Inspired by nature and life along the coast in the north, she writes extensively about everything from love and everyday life to fisheries policy, agricultural negotiations and mining resistance in Repparfjord. Through the use of poetry Islam and song, she creates a genuine, close and engaging poetry experience with humor as well as seriousness between the lines.

Aust is also known as a vocalist in the folk rap duo, Origin and the punk band The Cameltoes, and has in recent years played on many North Norwegian stages and festivals.

About Shanti is an acrobatic meditation inspired by the timeless wisdom of the Buddha:
“Better than a thousand hollow words, is one word that brings peace.” - Buddha
Aman Tamang & Renu Ghalan (NP) are two charismatic circus performers from Kathmandu, Nepal. Since 2017, they have been on extensive tours in Norway, Wales and England with the critically acclaimed new circus performance "As a Tiger in the Jungle" by Cirkus Xanti. The performance is inspired by the lives and destinies of Aman and Renu, and their experiences as child slaves sold to a circus in India.

"HOP" is a ceremonial tribute to spiritual rebellion and universal counter-force inspired by the practices and prophecies of indigenous peoples.

We aim
We are betting
HOP

CROTONICX is a project-based performance collective initiated in 2001 at Hausmania by Loan TP Hoang. CX explores dance, rhythms and rituals in collaboration with artists, actors and activists across artistic discipline, form and expression. The projects are based on cross-genre experimentation, exploration and development of new performative spaces and expressions that open up new connections, presence and contact between people, nature and the universe.